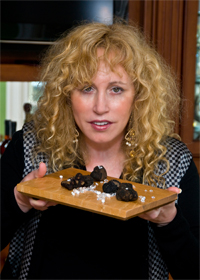 Since 2006 Susan has been developing the largest commercial truffle orchard in America. The truffiere grows and harvests the Black Diamond French Perigord Truffle, the most sought after truffle in France.

Susan uses her culinary talents to create and distribute truffle products to the world with an exquisite fusing of European and American flavors.

Susan’s message of this delicacy is being delivered across the world as her passion to bring this fungus to the palate of American’s is featured in associated press articles throughout the world. She has been featured in thousands of top media publications throughout the world. Including USA Today (on three separate occasions), W Magazine, Fox Business News prime time, Luxury Living, Robb Report, Wine and Food Radio South Beach and major newspapers, blogs, chef’s editorial, television and radio talk shows.

Susan’s passion for this sexy delicacy brings excitement to wine and food events and social gatherings. Her blend of culinary talent and business smarts creates an atmosphere of pure indulgent for all to share with a smile.

Susan is a member of the Women Chef & Restaurateurs organization and Fancy Food Show. She is on the USA today board of CEO’s. Serving as a board member on the Agricultural and Technical College in Greensboro in research and development s aids her in her quest to turn NC Tobacco farmland into an alternative crop producing truffles. Susan works with State Agriculture departments, European truffle experts and truffle growers throughout the world was.

Susan was inducted into the New Hampshire chapter of Chaîne des Rôtisseurs as the “Professionnel de la Table” on October 29, 2011 and is a current member.

Susan’s home base and test kitchen is in Pinehurst NC. The orchard is located approximately 10 miles from her home. She shares in local events like the famous Annual Wine Festival in Pinehurst as the chef has asked her to participate and cook as his special guest for the past four year.

Susan was the special guest at the San Diego Wine Festival with Chef Gary Thompson and was the highlight of the event with a truffle cooking class on November 18, 2009.

Susan Alexander is known throughout the truffle world as an authority on the tasty fungus. She works with master chefs, truffle experts, universities and farmers to keep the truffle movement in America current.

Susan Alexander has been aired on television, twice on Fox News shows. Once on May 6, 2011 and again on March 8, 2012. She can also be viewed on Woman For Hire NYC which aired June 16, 2010. Women for Hire which specializes in diversity career recruitment and empowering professional women.

Susan is available to consult for events and dinners, including:

Schedule an appointment
to meet with Susan Alexander

SUSAN IS A MEMBER OF

SUSAN IS FEATURED IN