Celebrities and Filmmakers are Obsessed with Truffles, and Here’s Why

Home / Truffle Faves / Celebrities and Filmmakers are Obsessed with Truffles, and Here’s Why

Oprah Winfrey is crazy about truffles—it’s actually no secret that she carries truffle salt around with her. Catherine Zeta-Jones washes her hair with a $250 truffle-based shampoo. Master of suspense Alfred Hitchcock once wrote a screenplay with a plot that involves the murder of an old truffle hunter.

We already know about truffles’ popularity among chefs but with the growing list of truffle addicts—from John Travolta and Cindy Crawford, to Richard Gere and Mariah Carey, it makes one wonder: what is it about truffles that makes them so appealing and irresistible to well-known personalities from the world of entertainment and cinema? Three words why celebrities love truffles: aroma, flavor and mystery.

Truffles have already appeared in many movies, and the scenes where they are featured are almost always of actors either smelling or grating them. In the 1965 Italian film “L’uomo dei cinque palloni”, for instance, we see Marcello Mastroianni go to the market, stop at a truffle stand, smell a few, and buy them. In the 2007 American film “No Reservations”, we see Catherine Zeta-Jones cook a truffle dish and preserve the extra truffles in a box filled with rice. You may be wondering, “What do they smell like, anyway?”

Well, some people say truffles smell like heaven; others, 3-week old sweaty gym socks. Where does this love-it-or-hate-it scent come from? According to researchers, it is made up of interesting chemical compounds like dimethyl sulfide, which smells like rotten cabbage; 3-methyl-1-butanol, which smells of whiskey and chocolate; and hexanol, which smells like freshly cut grass. Hmmm!

While not everyone enjoys it, it’s exactly what draws truffle-hunting dogs in. Often attracted by the smell, these dogs dig up truffles, carry them carefully in their mouth, and deliver them to their master unharmed.

We all know Oprah Winfrey to be a self-confessed truffle freak, but just how much of a truffle freak is she? Besides carrying truffle zest in her purse, she’s also been known to pop up in restaurants with entire fresh white truffles, which she then asks chefs to shave onto her meal. This could easily come off as weird but, hey, in the words of Oprah, truffles have the ability to turn “scrambled eggs, popcorn, even plain old cottage cheese into a major thrill.” And I agree. Truffles do make everything better!

When it comes to flavor, the words garlick-y, musky, and funky come up a lot. They make a delightful addition to any dish and bring a truly unique flavor to any meal. And the best part of all? There are plenty of ways to do it—from using truffle oil, down to grating fresh truffles over anything and everything. I personally like adding truffles to my grilled cheese sandwich, and it’s a magical experience every time.

There aren’t too many films out there about truffles but there’s one where our culinary gems play a big role. Aptly called “Truffe”, this French-Canadian sci-fi film tells the story of how, due to global warming, black truffles suddenly start growing in the basements of city buildings, ultimately transforming a working-class Montreal neighborhood into a truffle mecca. 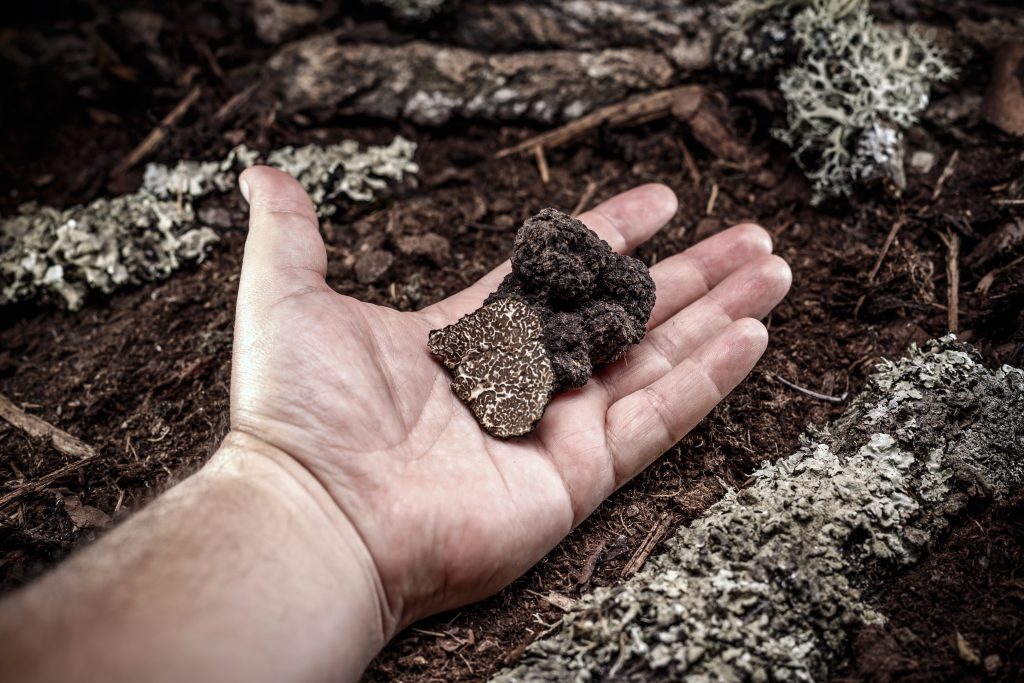 Fresh black truffles, looking like the precious culinary gems that they are.

Truffles are not your ordinary fungi. Besides having a rich history, truffles have always been steeped in magic and mystery. It’s the way their spores are practically sown in nature, thanks to the animals that eat and digest them. It’s the leprechaun element—because no one really knows much about them and not everyone has access to them. It’s their ephemeral nature—their sensual, earthy essence that fades too quickly. Truffles are mysterious because of all these things, and so much more.

Now this air of mystery is the very thing that inspired not just films and filmmakers but also different works and major figures in the world of literature. Shakespeare, for one, wrote of them. Molierre helped truffles gain even more popularity with his comedy, “Tartuffe”. Both Nicander and Plutarch came up with their own hypothesis about what they think truffles are. And to this day, truffles continue to intrigue the world’s most curious-minded creative folks.

Identifying what makes truffles so appealing and irresistible is no easy task—mostly because no description ever does them justice. I can describe their pungent aroma and distinct flavor, but beyond that, truffles are rare and mysterious gifts of nature, which makes them perpetually desirable. And if loving these highly sought-after fungi is wrong, I’m pretty sure it’s safe to speak for everyone when I say we don’t want to be right.