Truffles rank among today’s highly sought-after commodities. Some claim its earthy flavor to be what draws them in, while others argue it’s the sensual appeal of its smell that turns them on. We already know that even the smallest truffle shaving can have the most dramatic effect upon the simplest meals, but what do truffles really smell like?

While not everyone is willing to pay $100 for a truffle dish, those who do get to experience the gourmet gem describe the smell of truffles as hypnotizing – so much so that as soon as its aroma hits you, you forget everything around you and your mind flees to a dank green forest, someplace in Europe, populated with ancient trees, forest nymphs, and other mythical creatures. And it’s true: truffles emit aromas of another world.

What’s in a Scent?

The smell of truffles attracts not just the most enthusiastic gourmands on the planet but all kinds of creatures, too – from flies, rodents, and squirrels, down to the famous truffle-sniffing pigs and dogs. 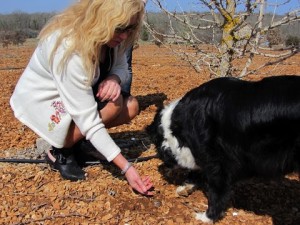 Susan with dog sniffing for truffles

German researchers discovered that truffles contain twice as much androstenol (a male pig hormone) as male pigs would normally have, making female pigs the ideal truffle hunting buddies: she detects a sexy smell, she’s driven wild, she dives right in, she digs frantically. But then she’s also inclined to eat her find; in walks the other group of professional truffle hunters, dogs. Dogs are sometimes preferred to take over truffle detection duties. And just how are they trained? Their humans smear new potatoes with truffle oil, which contains dimethyl sulphide – one of truffles’ most important aroma molecules, bury them in the garden, give their dogs the smell, and tell the dogs to find them.

Interesting stuff, really, but what about us? Why do we find truffles arousing?

Besides being the “diamonds of the gourmet world,” truffles have also been dubbed as the culinary counterpart of sex. Napoleon’s only legitimate son is thought to have been conceived after munching on a truffled turkey, while women throughout history are said to have fed their lovers truffles to rouse their desires. Could it be because of the flavor? Maybe. Then again, there’s androstenone, the human pheromone present in truffles, which contributes to its overwhelming aroma, which then often becomes the flavor itself. 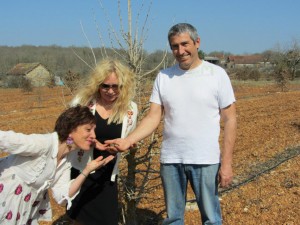 Me with the French truffle orchard owners.

You pick one up, feel its weight in your palm, give it a very thorough sniff, and — if you’re lucky to have a good one – it will emit a scent of incredible intensity that’s hard to describe. Sure, they’re earthy, and garlicky but truffles’ hints of exotic flowers and the finest of mushrooms are just as impossible to ignore. Their scent help lift up flavors when cooked with other ingredients, enhance the texture of every single bite, and leave a lingering aftertaste.

Now you don’t have to be a gourmet cook or a professional foodie to appreciate the sexy scent of truffles; you just have to be adventurous and a tad experimental with preparing truffle specials because the only way to know, really, is to experience truffles yourself!

Try our Truffled Grilled Cheese Sandwich to get started (it comes with a free truffled popcorn – aka “Charlie’s Truffled Popcorn”)! Or if you want to do some cooking, grab my truffle recipes here. You can learn more about truffles’ aphrodisiac status, too, by watching the video below.