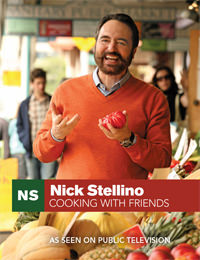 It’s no wonder one of America’s favourite television chefs and authors happens to be Italian-American Nick Stellino, as his delicious recipes constantly tempt the taste buds of hi sviewers. He’s also a favourite of ours here at Susan Alexander Truffles because he enjoys the luxurious fullness that our truffles can add to his dishes.

Watch this video of him preparing an amazing “Silky Corn Soup with Truffle Oil & King Crab Meat” in a recent episode of his cooking show – using none other than Susan Alexander Truffles’ gorgeous Truffle Oil! The recipe, which can be found in the description of his Youtube video, includes 1 full tablespoon of Black Winter Truffle Olive Oil to top off the crab mixture of the dish.

Near the end of the show, when he’s putting the finishing touches on the dish, he enthusiastically says, “And most importantly, the truffle oil arrives! The truffle oil puts a flavour into this dish that’s divine!” And he’s right, our truffle oil adds a whole new, rich dimension to this elegant recipe!

Watch this video to learn more about you can improve your dishes with truffles.

Nick is the chef and host on the public television cooking programs Cucina Amore and Nick Stellino’s Family Kitchen. He uses Susan (Rice) Alexander Truffles’ specially-created truffle products in some of his recipes, including in his popular cookbook “Nick Stellino Cooking with Friends”.  You can learn more about his recipes with Susan Alexander’s truffle oil at NickStellino.com.